On the weekend of January 5-6, 2019, Jon Braun (skip) and Matt Miller won the inaugural Lee/Bhartu Indoor 3 Bowl Pairs Open Tournament. There we 22 teams entered in the event. Other KLBC members participating were Linda Ng, Jack Green and Barrie Brown. Linda Ng and her partner Jim Duholke (skip) finished the tournament in third place. Jack Green (skip) and Barrie Brown finished just out of the playoffs but were the only team to beat Jon Braun and Matt Miller in sectional play 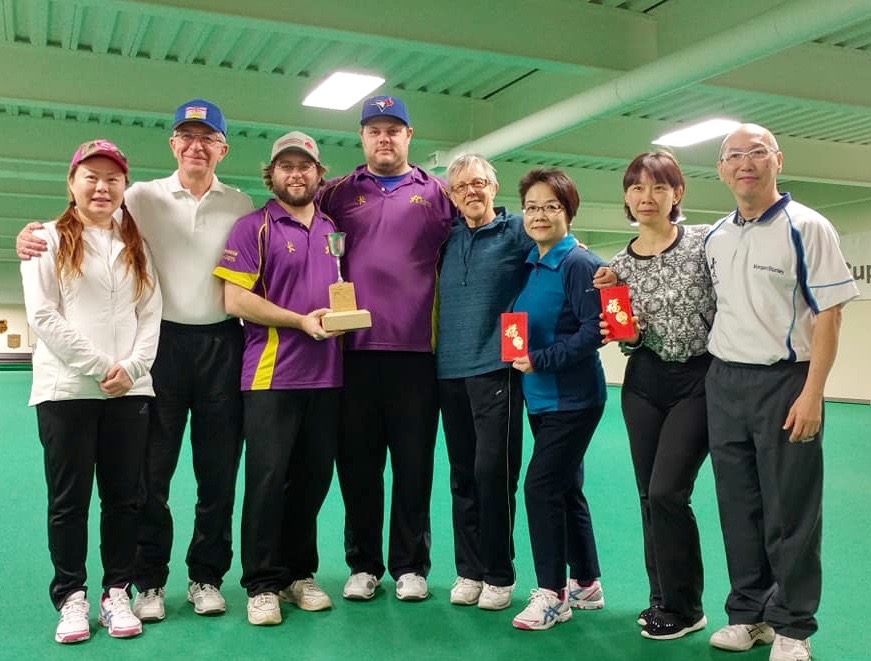 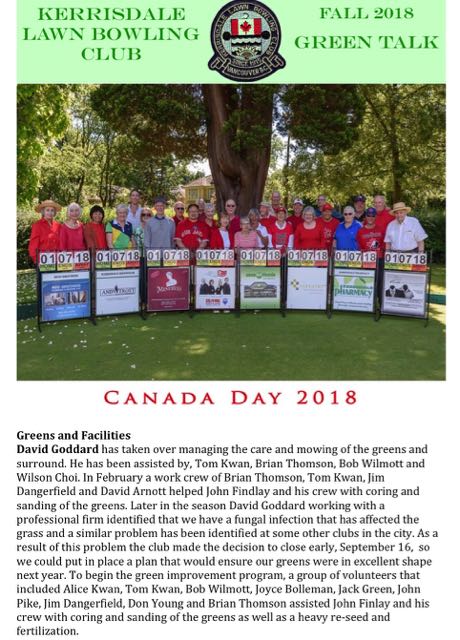 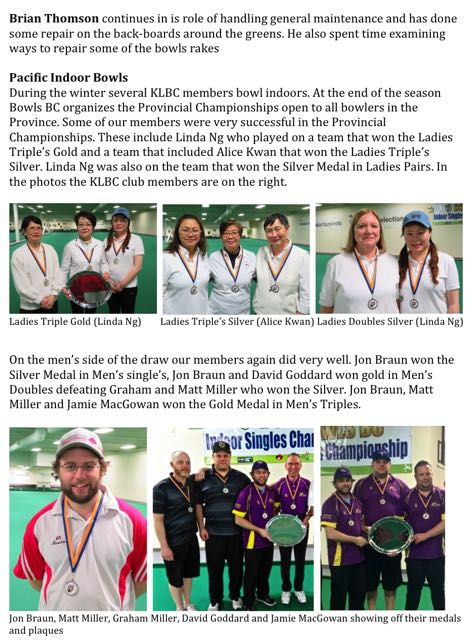 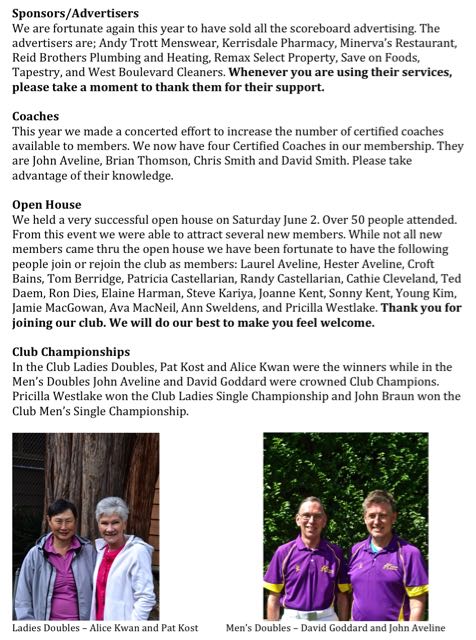 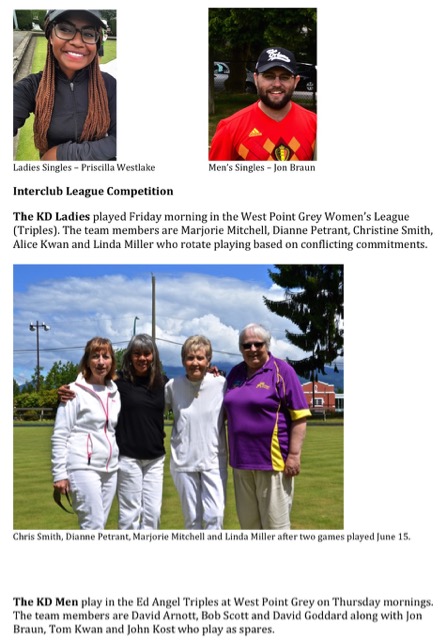 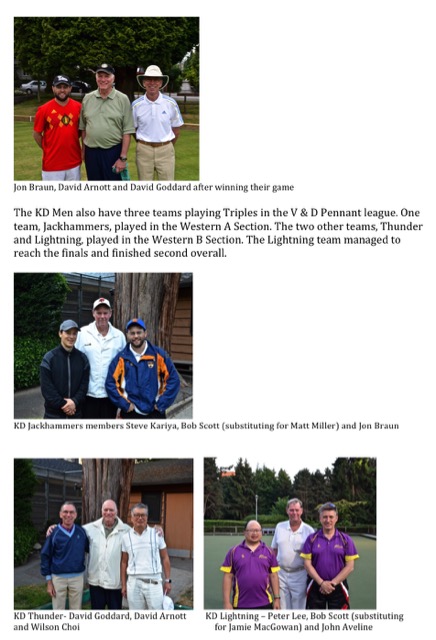 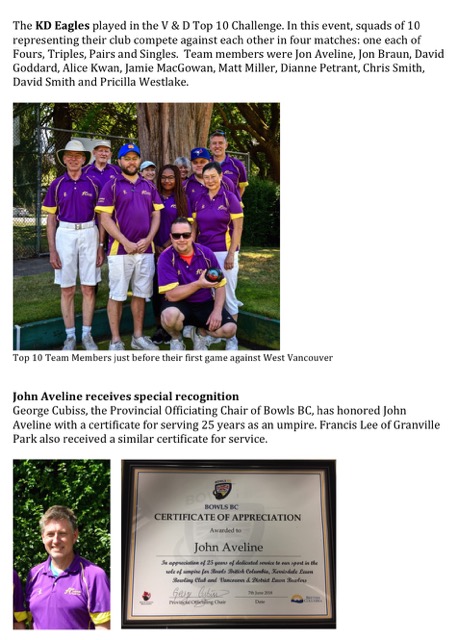 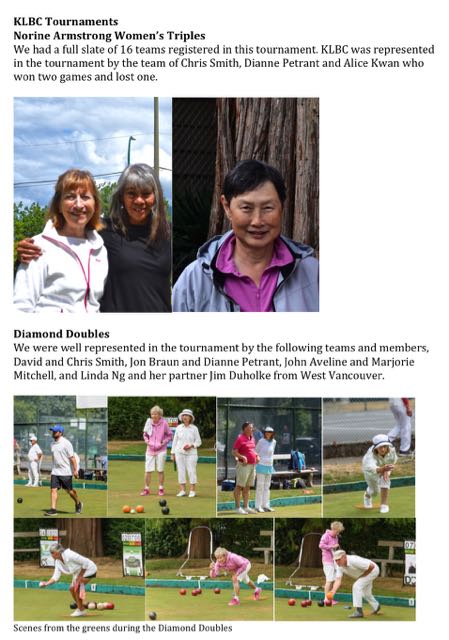 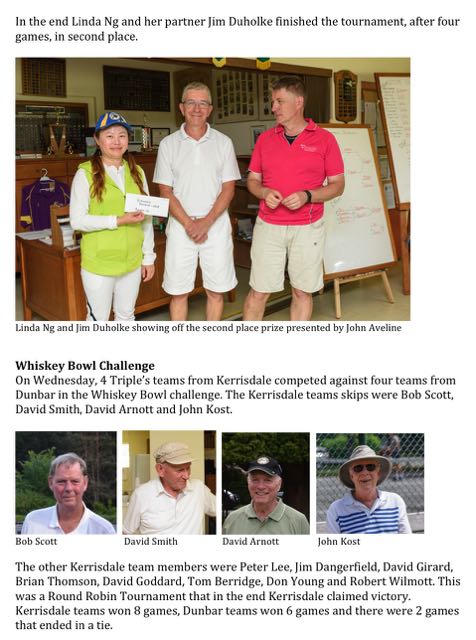 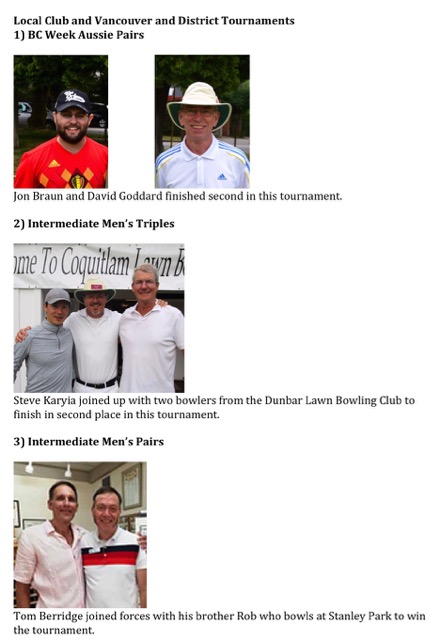 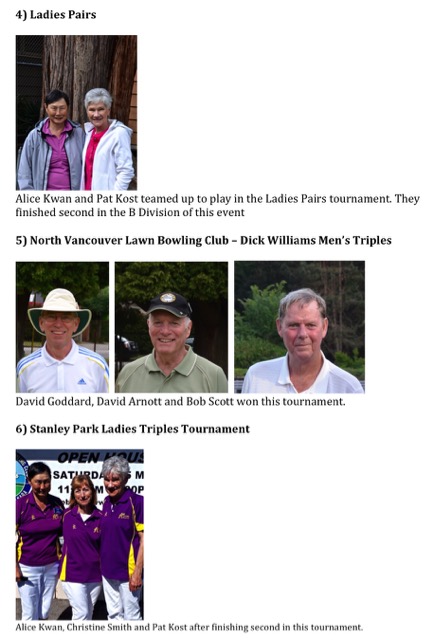 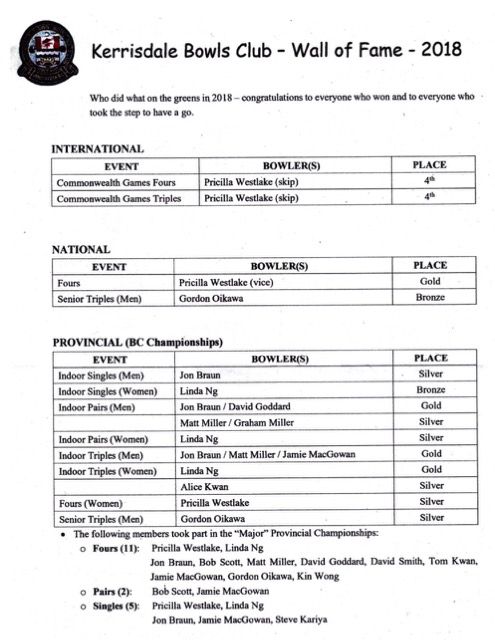 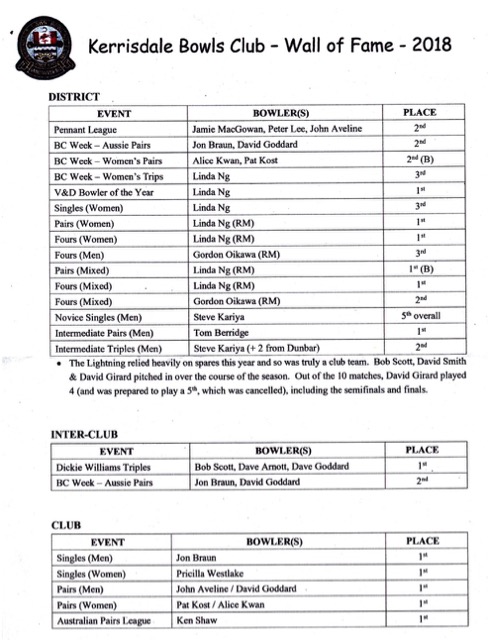 The 2015 season has started off fast and furious for Kerrisdale's 100th year.  So much so, that it is hard to know where to start.

In Monday Pennant League Kerrisdale has 3 teams for the first time in history.  This is more than the rest of Vancouver, Burnaby and Richmond combined!!  In the first week's tilts, the teams went 1-2.

At the V&D Men's Fours (the oldest V&D in existence), our team of Jamie MacGowan, Jon Braun, Graham Miller & Matt Miller, made it to the finals only to lose to the Van South team of Bob Scott, Vince Mai, Brad Neave & Ricki Chan.

Out Top 10 side's goal of a finals berth was dashed in the opening round at Van South.  All the matches were good ones and all were within reach, but the final result was a 1-3 loss.  Triples (John Aveline, Graham Miller, Alice Kwan)got the win 17-11, although they conceded the last 8 shots and gave up some hard-earned shots up.  Singles was the opposite as reigning provincial singles champion Jamie MacGowan fell 15-21 to national team member Steve Santana.  He made up a lot of ground and made a huge dent in an early deficit.  The pairs duo of Jon Braun & Cathy Selzler fell behind early to Bob Scott and Cathy Higgins, but rallied from 10 down to take a 1 shot lead.  At that point Bob found another gear and went on to win 18-15.  The fours crew of Barrie Brown, Joyce Bolleman, David Girard & Lynda Miller also fell back early to Vince Mai's team, but rallied and leveled the score at 10-10.  Van South stormed back and took an 18-11 lead into the 16th end.  Our guys dominate the 16th and lay 16 shots with one to play and Vince being Vince drew second shot to snuff the rally.  This was really solid performance by the Kerrisdale squad.  Almost every member of the Van South side has at least one national medal in their trophy case and most have multiple.  6 of them have bowled for Canada.  The strongest team we've ever fielded put on a great display of shot-making and will be around for years to come.

Finally and best of all for the third year in a row our club has a provincial gold medal to celebrate.  Five went out to compete in the provincial singles championships and it was Jamie MacGowan who brought home gold and will compete in Winnipeg in September in the nationals.  John Aveline, Jon Braun, David Girard & Cathy Selzler also 'had a go' and will be heard from in the seasons to come.

Tonight the Men's Colt Singles are being contested in Richmond and we have a group that is both large (Grahame, Jon, Pete, Matt) and strong - 2 provincial champions and 1 national champ and, of course, the reigning V&D Colt Singles Champion). If you can, pop out to Richmond to support the guys.

This is late in the posting and almost isn't news, but Jon Braun has brought home to Kerrisdale its first ever National Championships medal and we have started at the top with Gold!

Jon and skip Jamie McGowan went 7-2 in the Round Robin to finish first overall. They then avenged a 12-14 first loss by defeating Alberta by a score of 18-14. The boys were actually in cruise control conceding a harmless 3 in the last end. This is great for the whole club and a pat on the back to our own Jack Green and Barrie Brown, who were provincial silver medalists and lost by only 1 shot. If you're going to get beat, get beat by the best!

BTW, true historians will know that the gold medal match win was an example of long delayed revenge. In 1953 it was a Kerrisdale foursome that won provincial gold and which then competed with the national champions from across the country for the right to represent in Canada in the Commonwealth Games to be held in Vancouvr in 1954. Unfortunately, they lost in the first round of the straight knock-out event to Alberta (the match was played in Penticton with a number of members going up to watch and support the team). So, 61 years later . . .

The team of Jon Braun, Graham Miller and Matt Miller won the V&D Men's Colt Triples held in Coquitlam on Sat 9th.  The trio steam-rolled over their opponents winning all 4 matches they played with the maximum 10+ shots (they actually accumulated +51 shots over the day.  The guys also won 30 out of 40 ends.

BTW, Graham also earned the right, with partner Barrie Brown, to represent the club in Provincial Champion of Champions in Victoria on the Sept 13/14 weekend.

After a tough loss in the Top 10 to Richmond, Kerrisdale had a HUGE bounce-back in the Provincial Men's Pairs.

It was the only game out of 7 in which Jamie and Jon were forced to play the full 18 ends.

It's been a busy Wednesday July 2nd for Kerrisdale bowlers - and a successful one.

The fun started at the inaugural V&D Junior Singles Championships in Tsawwassen. Our 13 year old Laurel Aveline was competing in her first singles tournament and she did very well. Her first match was a 5-3, 5-5 win over a local Tsawwassen boy and she followed that up with a 5-2, 3-3 win over another boy from Maple Ridge. That earned her a spot in the finals against Emma, a very good junior in the mold of Priclla Westlake. In one of her earlier sets Emma had racked up a 16-0 score in 5 ends. Laurel gave her all she could handle, winning the first set 7-2. Emma grabbed a 5-0 lead in the second set, but Laurel fought back with a 1 and 3 to trail by only 4-5 playing the last end. Emma managed to score 1 to force a tie-breaker. In the tie-breaker, Laurel drew first blood with a single, but then Emma played some really solid bowls and scored a 4 and 2 to takee the match and the trophy. Laurel admitted after the match that she didn't feel any nerves until the second end of the tie-break. Anyway, a great start and all the more impressive when you consider that she has only bowled twice all year!

While this going on our guys were hosting the 3rd annual Whiskey Bowl against Dunbar. This year there were 4 triples teams from each club, playing a total of 16 matches. Club with the most wins takes home the trophy and a 16 year bottle of scotch, donated in memory of Ron Leyland, whom we lost earlier this season. Although the morning matches were all fairly close, the after was all Kerrisdale's and our guys romped home with 12 wins, 1 tie and only 3 losses. Many of our bowlers are very new to the club and sport, having only just started this year or last year. Great showing guys!

Finally, the Women's Classic Pairs had their last sectional matches played last night. We have 4 women in this event for the first time in its history, All four have a had a good showing, but, unfortunately, only one has managed to make the play-offs. Cathy Selzler and her partner from West Point Grey lost their last match and finished 2 spots out of the play-offs. The all-Kerrisdale duo of Pat Kost and Joyce Bolleman finished just in front of them and just shut out of heaven. Cathie Cleveland and her Van South partner Diane Fulton won their last match and qualified 6th. Quarterfinals will be be played next Tuesday, July 8th.

The Kerrisdale Eagles soared to the heights at home in a quarterfinal tilt against the Maple Ridge Tigers.  With a fairly comprehensive 3-1 victory, the squad has now earned the right to face Richmond on the artificial greens of the Richmond club in about 4 weeks time (July 24).

Our squad was led by its larger teams, the fours and triples who combined for 2 wins and +29 shots.  Singles brought in another tight win, 21-18.  Only the pairs took a loss 13-21.  Congratulations to the 10 players:

Thanks to designated spare, Laurel Aveline, for creating team bracelets in club colours.

Kerrisdale gets past round 1 in the Top 10

The Kerrisdale Eagles took on the West Vancouver Wolverines in Round 1 action in the Top 10.  And the names weren't the only new thing.  The club's new purple and yellow shirts got their debut.  It was successful all around as the home Kerrisdale 10 took out West Van 3 games to 1 with a +16 shot differential.  Everyone had something to brag about by the end of the evening.

The first match finished was the singles (as always) and John Aveline fought off adetermined opponent 21-17.

At that point Kerrisdale looked pretty comfortable with a big lead in the fours and two very close scores in the pairs and triples.

Jack Green and Joyce Bolleman might well have had the best reasons for smiles.  They played West Van's top duo of Myrle Lawrence and Commonwealth Games bound Tim Mason to a virtual stand-still, losing by only 2 shots, 13-15.

Squad captain, John, noted, "Holding Tim in check was huge for our side.  It prevented them from gaining any momentum or positive energy.  In Top 10, if you can shut down your opponent's 'big team', you take something away from the whole side.  That's what Jack and Joyce did for us."

Kerrisdale's 2nd round opponent is Maple Ridge Tigers.  That round of matches will be played at home (phew!) on Friday, June 27th starting at 7:00pm.